The Champion of Champions competition for GOS pigs brings together the top pigs from the major shows for a final staged at the Royal Three Counties Show and with the record entry this year there was the largest turnout ever seen for this challenge for the Elwes Memorial Cup.

The judge this year was Viki Mills who bred GOS back in the 1970s and 80s before turning to other breeds. She had before her the cream of GOS Champions from shows such as the Royal Bath & West, Royal Cornwall, South of England and the Royal Three Counties itself.

After due deliberation, she awarded the accolade to Pebblesford Sambo 411, a September-born boar shown by Kilcot Pedigree Pigs from Ross-on-Wye and bred by Mr John Lightfoot from Hartpury, Gloucestershire.

The runner-up was Birchfield Rufus 216, another boar shown and bred by Miss Sarah Whitley from North Yorkshire. For the full story click here. 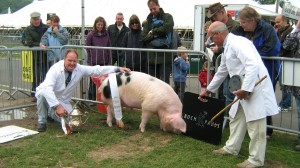