Honley Show near Huddersfield Yorkshire a one day show held on 13th June which under the secrataryship of Mr John Wreakes had over 40 pigs of all breeds in attendance. Michael Paddock had made the trip up from Three Counties where he was showing to judge and Marlene Renshaw came across from Lincolnshire to provide an excellent commentary for the assembled crowd.

The Fowgill herd represented the GOS breed and came in 3rd & 4th in the July gilt class behind Brian Mulkeen’s all conquering Saddlebacks. The Fowgill gilts faired well in the pairs coming a respectable 3rd beating off single colour pig pairs. Missy aka Fowgill Princess 139 was somewhat miffed to be overlooked in the prettiest pig class which was won by a Large Black January in a batman cape! 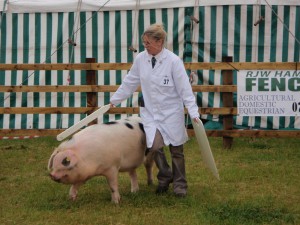 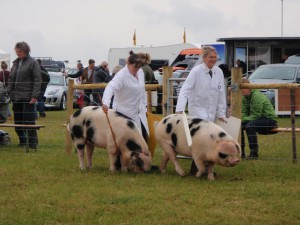