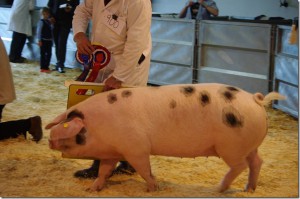 In the Traditional Breeds Championship 4 of the 5 pigs in the ring were Gloucester Old Spots from two different owners (all “Hemsbrook” pigs!). The other pig was a Middle White which was placed as Reserve Champion.

The judge was Helen Tongue from near Chepstow.