With some 70 pigs entered, it was going to have to be something special to win the championship at this year’s show at Malvern and Teresa Cook, having travelled from the far reaches of the Suffolk coast, justified her journey by taking the top prize with Winterwood Princess 213rd with Sarah Whitley’s July Gilt, Birchfield Bluebell 248th the runner-up. 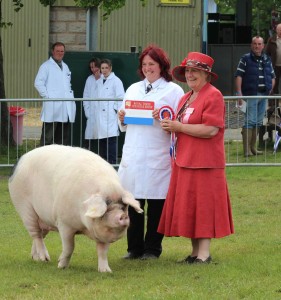 Teresa Cook with Winterwood Princess 213 receiving her prize from the judge, Judith Sims