The GOSPBC Annual General Meeting 2021 was held on Sunday 11th April at 3pm by Zoom.

After some initial technical difficulties the committee was joined by Diane Bell, Sally Lugg, Sarah Osborn-Smith along with Sharon Kay and Bill Theiss joining in from the USA.   A full report will appear in Spot Press but the main news is a change of Secretary for the Club.

Marlene Renshaw has served as Secretary since 2014 and earlier this year made her desire to retire from the role known to the committee. The Committee thanks Marlene for her years of service and are happy to announce she will remain a GOSPBC committee member. 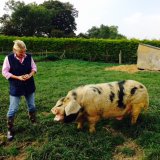 e are pleased to tell you that Mandy Garbutt who has been serving as Assistant Secretary shadowing Marlene for some time has agreed to step up and take on the role of Secretary for the GOSPBC. Many of you will know Mandy as the editor of Spot Press. She has kept GOS since 2004 up in North Yorkshire, has served on the committee since 2007 and been editor of our newsletter since 2014. She is well known in pig circles and can often be found in the show ring during the summer months.