STUNNING weather more than made up for the absence of a royal visitor as thousands of people lapped up sunshine on the first day of the 158th Great Yorkshire Show.
GOS breeders from across the UK started arriving on Sunday night well in advance of the show which started on Tuesday 12th with the breed classes.

The Champion GOS was Birchfield Bluebell 402 owned and bred by the Whitley family. ‘Sheila’ is due to farrow at the beginning of August and looked in great shape. 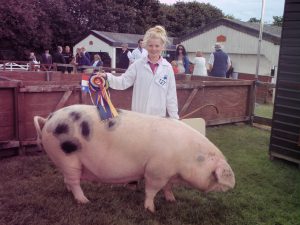 Sarah Whitley & a very rotund Sheila showing off their rosettes.

Reserve Champion was Littleowls Dolly, a July gilt owned and bred by Jason Knaggs. Congratulations to all.

There will be a full round up of the GYS and Teresa Cooks amazing success in Pig Of the Year with Millfields Princess 144 winning the coveted Traditional Female POY awarded by judge Kevin Matthews in Autumn Spot Press.