September 2015 Show Round Up

The show season continues well into the autumn season.

Dawn Stevens was at Usk show with both her GOS and KK’s and got champion & reserve with Cher & Gavin her KK’s! Photographs show them in action and Aleisha having a well earned snooze!

Fowgill & Birchfield show teams made their way across the Pennines to the Crooklands showground on a glorious sunny Thursday. The Tamworth Club held their own classes and their Champion of Champions at the show and pigs travelled from Somerset and the West Midlands to compete with their title going to A J Browns Valstock Lucky Lass. In the other classes Whitley’s Pebblesford Gerald 827 bred by Messrs Lightfoot Glos won the senior boar class. GOS couldn’t beat the Saddlebacks in any of the gilt classes but Birchfield picked up 2nd prizes and the Fowgill gilts got the 3rds. Birchfield Princess 666 was champion GOS. Photo below with Lorraine Whitley Photos Paul Mohun

Once again GOS from the Birchfield & Fowgill herds trundled down the M1 on a dismal day to Pensitone show. Here its all coloured pigs together and Sue Hutson was really up against it with Hampshires, Pietrains, Tamworths, GOS & OSB’s to choose from. Messrs Fairclough & Roberts Hampshire sow Miranda was Champion once more this year. The Fowgill girls managing a 3rd in the pairs. Ella Kirtley won the Young handlers with her GOS pig and Lily Mason also competed. 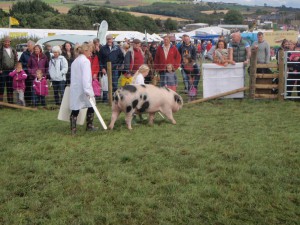 Lily Mason gets her Dolly on the march around the ring. 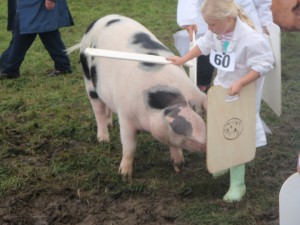 Lily Mason battles with a grumpy Dolly! in the young handlers

Magnificent turn out of GOS at the Royal Berkshire from all points South for the GOS Southern Championship.

Congratulations once again to Mike Smith on an outstanding season culminating in winning the Nashes Trophy once again with his sow Cosscoombe Primrose 2. 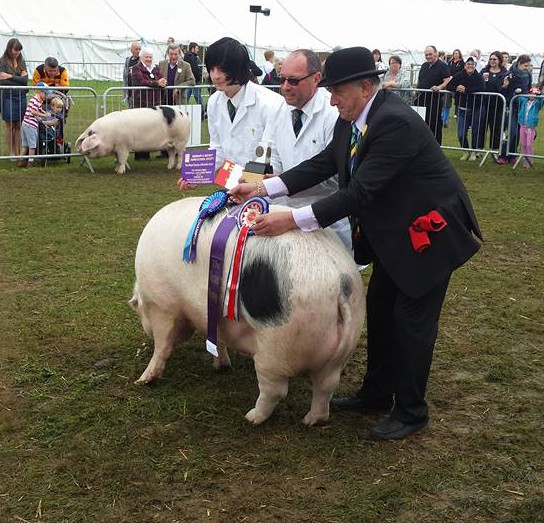