August is the busiest month of the show season for one day events and lots of pigs out strutting their stuff and promoting pig keeping.

But with its remit rooted in the region’s agricultural traditions, the heart of the show remains its livestock competitions, with a record-breaking entry of cattle and sheep on show as well as pigs, poultry and other animals – all instantly accessible to inquiring children. Show president Kevin Bowes said: “Everyone I speak to here says what a wonderful show it is. It has a wonderful family atmosphere. One of the main reasons for doing it is to make people aware of food and farm animals, and to try and connect the two. Even in Norfolk we can be a bit green about things like this. This is a way of showing our agricultural ways, and explaining where our food comes from – and we give families a fantastic day of entertainment on the back of that.” 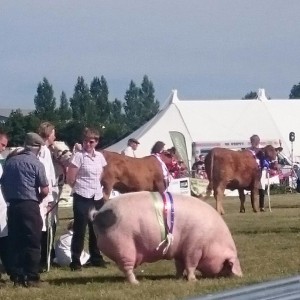 Winny in all her winning finery

Tockwith Show (N Yorks)2nd Aug – 60 pigs on display at Tockwith with extra pens having to be made on the day and pigs being doubled up. On a hot & humid day Chris Penrice judging started at 11am and finally broke for a late lunch at 3.15pm. All classes well supported with 10 pigs in class 146 breeding gilt which took 35min to be judged such was the thoroughness of the judge, with GOS pigs going on strike in one corner of the ring! Finally it came down to the Kevin Matthew’s Saddleback and Andrew Warriners GOS with Kevin’s pig winning outright. Mandy Garbutt’s pair of GOS won the pairs beating off Hampshires & Welsh pairs. A lunch followed for exhibitors kindly provided by Messrs Horsley & Holding. 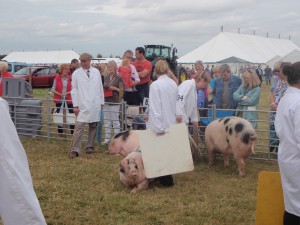 GOS on strike during a long class in warm weather 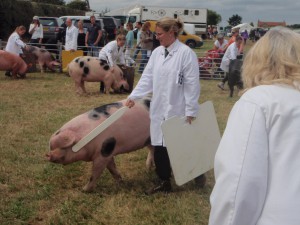 Burwarton Show (Shropshire) 6th Aug Despite the dull, damp, weather during the early part of the day,  the sun came out mid-morning and continued to shine all day long bringing out thousands of visitors to enjoy the day. There was an interactive pig handling display by the Kune Kune Society. Club member Jonathan Furber & family were in attendance with their pigs.

Chertsey Show (Surrey) 8/9th Aug This show is the only show within the M25 circle and has been extended to two days to fit all the classes and visitors in. Nick Kiddy judging the pedigree classes agreed with New Forest results awarding Kinecroft Dolly 3 & Dennis Ballard first prize in the gilt class.

Fillongley (Warks) 9th Aug Fillongley Agricultural show is a local village show founded in 1918 to promote rural life in and around Fillongley village, near Coventry. Former Royal Show winner Malcolm Hicks and family were out with their GOS pigs. Pictures of Harvey, Henry, Edward & William with their young handler rosettes. Thanks to Su Hicks for photographs & Shirley Howes for results 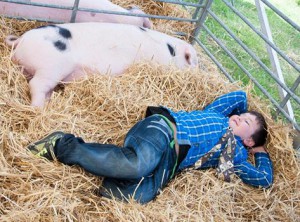 Chilling with the GOS at Fillongley Show 2015

The Hicks boys clean up in young handlers 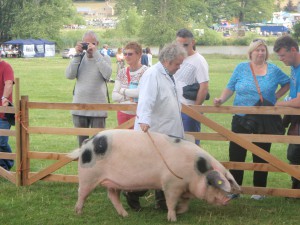 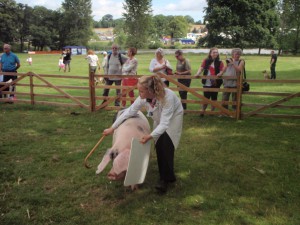 Ella Kirtley showing how its done in young handlers 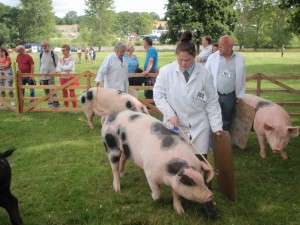 Malcolm & Sue Hicks took their team and got Champion with a January Old Spt and Reserve with a February.

Egton Show (N Yorks) 26th AugustFowgill Dolly 134 & Fowgill Princess 139 were 2nd & 3rd respectively behind Alfie Holding’s Tamworth ‘Maisy’ . After slipping in the ring and sustaining a bump on his head Alfie asked Lily Mason to take over showing Maisy which she did admirably. Trisha Horsley’s Welsh gilt was supreme champion.

Alfie & Lily have a well earned t-break after showing 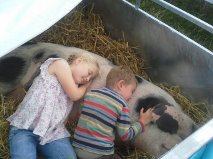 Melplash Show 27th August  Crowds flocked to the ‘wonderful’ Melplash Show to celebrate the best of the west Dorset agriculture industry. Up to 20,000 people slipped on their wellies at the West Bay showground, enjoying hundreds of classes and competitions ranging from livestock and showjumping to cookery. Mike Smith was out with the Cosscoomb herd in the pig classes.

Record crowds flocked to the 157th Egham Royal Show, when warm weather and live coverage from BBC Surrey helped to generate a great atmosphere on the Showground at Whitehall Lane in Egham. The highlight of the livestock section being the competitive classes, on Saturday for the 6th year running there were modern and traditional breed pig classes that for 2015 were now officially BPA (British Pig Association) affiliated and for the 5th year in a row, there was the return of the very successful Dexter classes endorsed by the Dexter Breed Society with an afternoon grand parade and prize giving by our President. On Sunday we had rare, minority and traditional breed sheep classes in accordance with the Rare Breeds Survival Trust categories in the judging ring, followed by a main arena grand parade and presentation of cups by our President in the afternoon.

Berkeley Show 31st August – Carl & Lucy Whiting’s Peacehaven herd took a sow & litter for exhibition and were pleased with all the attention they received by the delighted audience. Note how their ring is made from hurdles surrounding the back of their trailer for ease of getting them in and out, a great idea sure to be copied.

Their own little show ring!